One of the enduring stories of the Mississippi John Hurt legend took place in 1964. The Newport Folk Festival, fresh on the heels of John’s resounding success at the 63’ Festival, took John to Manny’s Music in Manhattan and told him to pick out any guitar he wanted, recommending to him an expensive pre-war Martin. Hurt declined and instead selected a modest Guild F-30, not wanting to take advantage of his hosts. Mississippi John Hurt never liked for "too big of a fuss" to be made over him. As such, the Mississippi John Hurt Foundation, established in 1997, has held an annual festival uniquely suited to honoring the humble songster. 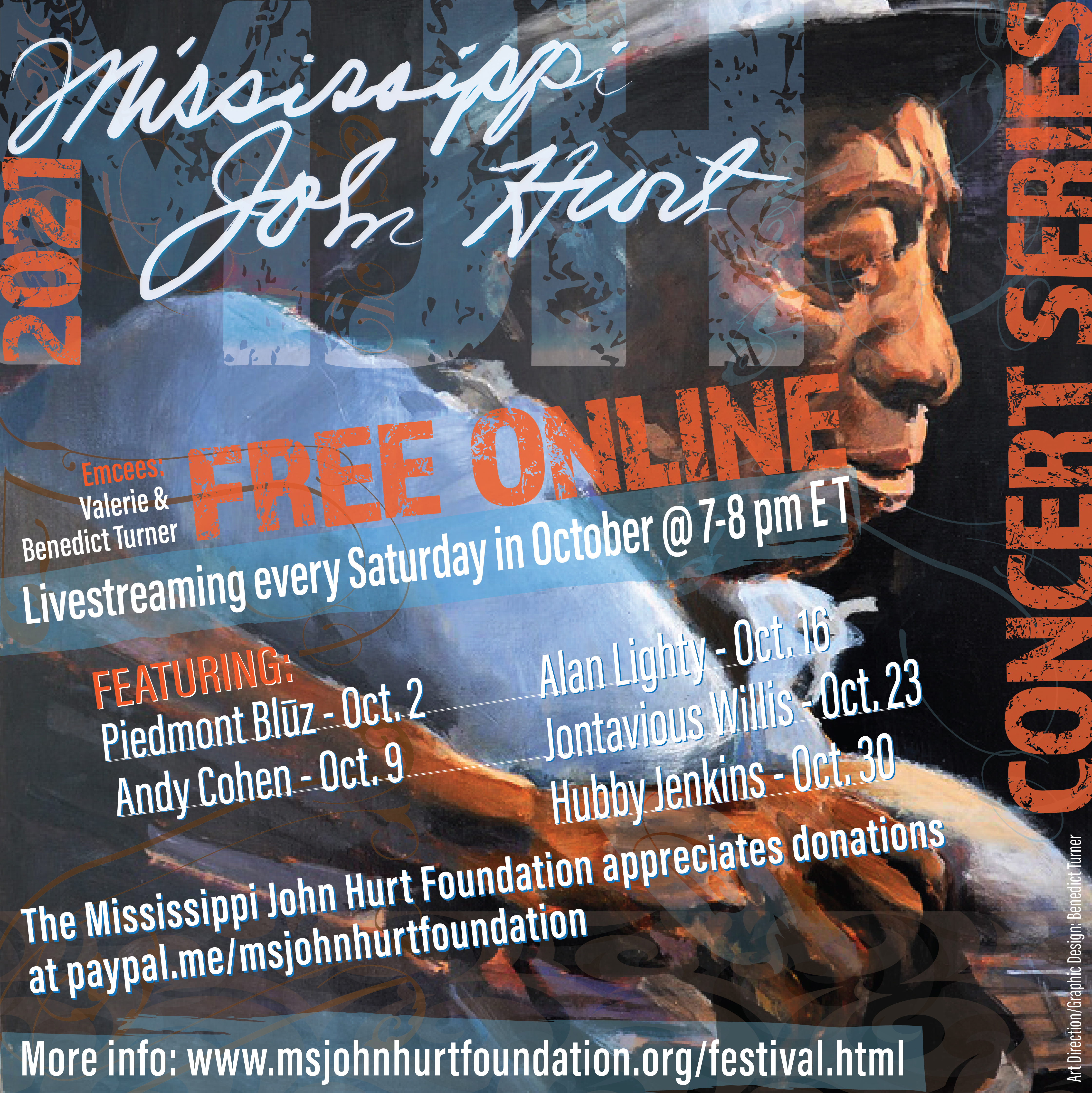 The last Homecoming event was held in 2019 and featured bluesman Taj Mahal, along with many others that he selected to join him for two exciting days of concerts.

It was with much sadness that the 2020 Homecoming had to be cancelled due to the pandemic. In 2021, not wanting to forego this annual celebration for yet another year, the Foundation made a decision to host the Mississippi John Hurt 2021 Online Concert Series, a series of virtual concerts that livestreamed onto the Foundation's Facebook page throughout the month of October.

A different artist was presented each Saturday, for a total of five exciting concerts. The artists that performed for the 2021 concert series were Jontavious Willis, the Piedmont Blūz Acoustic Duo, Andy Cohen, Hubby Jenkins, and Alan Lighty. The complete Mississippi John Hurt 2021 Online Concert Series is now available for viewing on the Foundation's YouTube channel. (Watch Now)

The first in-person Homecoming festival was held in 2003. Split over two days, the Saturday is always devoted to John Hurt’s Blues music, leaving the Sunday for his Gospel work. John never differentiated between sacred and secular in his playing and singing, and a two day gathering is the best way to honor the full spectrum of the man and his music. Don’t expect a modern Blues show with loud amplifiers and throngs of revelers. The festival more closely resembles the country dances and fish fries that John would play in his formative years as a musician. Festival goers are invited to enjoy barbeque (the best anywhere, including Memphis!), a beer or two, and to sit in the shade with their guitars, picking and singing songs from John’s repertoire. Fans aren’t expected to play or sing; they are equally welcome to sit on the Museum’s porch or in a comfy lawn chair and listen to the other musicians whose lives have been touched by Hurt’s life and music. For those who do wish to play, musicians of all walks of life and skill levels are welcome. Nowhere else will a budding guitarist find a more accepting and encouraging audience, and no greater tribute could be made to Mississippi John Hurt than for fans to celebrate each other and each other’s music.

The Blues festival begins at noon and continues until six. Resembling a crossover between a picnic, a Blues show, and an open mic, professional and amateur musicians take turns sharing the worn, wooden outdoor stage, performing John Hurt songs such as “Spike Driver Blues,” “Joe Turner,” and “Candy Man,” under the shade of tall Mississippi pines. The Museum doors are left open, and any festival attendee is free to grab some barbecue and peruse the items left in memoriam of John Hurt. In fact, many festival goers, upon Mary Frances Hurt’s request, sign the roughhewn wooden walls inside the house’s front room.

The special guest list of professional performers is a revolving list of musicians who knew and sometimes even played with Mississippi John Hurt. John Sebastian, of Lovin’ Spoonful fame, named his famous 60’s band after a lyric in John Hurt’s “Coffee Blues” and is a regular guest. Other notable guests include modern Blues musician Alvin Youngblood Hart, Chicago musician and educator Eric Noden, and Gene Bush, another guest who personally knew and played with Mississippi John Hurt. Most recently, the one and only Taj Mahal graced the festival with a stunning performance that will be long remembered.

As the sun sets on Saturday’s festivities, guests begin their slow procession out of Avalon, passing the site where John’s home originally stood, and the Valley Store. Before leaving, everyone is invited to climb the steep hill leading to the Hurt family cemetery. Here, fans gather in kinship and quiet respect to pay their respects to John, who is buried in a peaceful spot in the back of the cemetery. His tombstone simply reads “John S. Hurt,” followed by his birth and death dates. A special honor to some fans, Mary Frances Hurt often asks a select few to bring their guitars to the cemetery to play a song in tribute to the man who inspired them to travel many miles to rural Mississippi to pay their respects.

Sunday’s Gospel festival continues in much the same way as Saturday's Blues festival. After a headlining performance by that year’s Gospel act, fans are one again invited to participate in an open jam, or to play the open mic. While John Hurt’s Gospel music is the focus, the day always progresses organically with musicians switching freely between Gospel songs and more bawdy Blues material. John Hurt would approve wholeheartedly!

The ending of the festival is a bittersweet affair. Attendees are often found idling, looking for reasons to not leave. Pure kinship of this type is rarely found in this day and age, and it's a testament to John Hurt’s character that people are still united by the strength and kindness of his spirit decades after his death. Phone numbers and email addresses are exchanged and attendees make plans for visiting next year’s festival. If you're lucky, you might snag one of the unique Mississippi John Hurt t-shirts that are for sale - or perhaps a copy of his complete studio recordings on CD. Proceeds go to maintaining the museum and to continuing the festival. Walking in the footsteps of Mississippi John Hurt is a profound and joyous musical experience. Regardless of whether this is your first festival or your tenth, it is impossible to return home not having been touched by John Hurt’s spirit and the loving hospitality of his granddaughter, Mary Frances Hurt.